Vancouver, British Columbia–(Newsfile Corp. – April 6, 2021) – Mundoro Capital Inc. (TSXV: MUN) (OTCQB: MUNMF) (www.mundoro.com) (“Mundoro” or the “Company“) announces update for the Vale-Mundoro JV Program in Serbia, that includes (i) Phase 1 drill program at the Skorusa copper-gold porphyry system (“Skorusa“) and (ii) geophysical program at the Oblez license. Both programs are located in the southern portion of the Timok Magmatic Complex (“Timok“) west-southwest of the Cukaru Peki Deposit and the Bor mining complex.

Teo Dechev, CEO & President, commented: “The geophysical targets drill tested in the first three exploratory holes have provided valuable information to calibrate the understanding of the geophysical responses observed to the actual lithological units and mineralogy encountered. It is clear from the initial three drill holes that the targets drilled are in the periphery and distal to a porphyry system. The Technical Committee is expanding the target testing to additional targets focusing on depth extension at the West Zone and depth extension at a geochemical anomaly at the East Zone and a new geophysical ground magnetic anomaly south of the East Zone.”

“In addition to drilling, the AMT survey is ongoing and is expected to be completed by the end of April with geophysical models expected by the end of May. The exploration team is excited to review the results to facilitate further targeting and to identify the source of the pervasive geochemical signature at Tilva Mare which is approximately 5 km by 5 km.”

“From there, the team will follow up with additional field investigation of the newly identified alteration zone, Skorusa South target area, and the Markov Kamen East target area.”

“The Vale-Mundoro JV Program is expected to continue throughout the course of the year testing this prospective region for porphyry and related epithermal systems.“

The approved exploration work program of US$1.9 million is in progress and primarily focused on two of the four Vale-Mundoro JV Projects – Skorusa and Oblez. Both projects are located west-southwest of the Cukaru Peki epithermal-porphyry copper gold deposit and within the Timok Magmatic Complex (Figure 1). Exploration completed to date over the two projects includes:

The current exploratory drill program with Vale has tested 3 geophysical targets to 600 m depth at the outer north-eastern portion of the porphyry system that have not been previously tested. Drill core observation from recently completed drill holes suggests the elevated chargeability zones from the historical Induced Polarization (IP) survey are related to disseminated pyrite mineralisation from the country rock environment. Although the mineralisation observed in the first two holes was not significant in the northern portion of the system, further assays are still pending. The Technical Committee has expanded the drill program with an additional three targets to be tested (see Figure 2):

The Technical Committee is regularly reviewing the data and identifying further areas of testing. Assay results will be ongoing throughout the program.

At the Skorusa East Zone limited work has been carried out to date including two shallow RC drill holes and one diamond hole completed during a 2015 exploration program. The quartz and magnetite veinlets to stockwork mineralization found at the surface was shown to extend in depth. The Skorusa East Zone is an annular magnetic-high anomaly coincident with copper, molybdenum, and gold anomalies in the soil geochemistry. Like the West Zone, the East Zone has a zoned alteration pattern of phyllic surrounding an inner propylitic/potassic alteration core. What remains an area of open interest is the connection between the East Zone and West Zone at depth for a potential feeder zone.

The prospect area is outlined by copper in the soil geochemistry in the northern portion of the Oblez license (see Figure 3). The upper Cretaceous cover rock of volcanic agglomerate contains a variety of mineralized clasts with malachite, native copper and locally chalcocite. These clasts occur at the surface along road cuts and to a depth of 250 meters through one tested drill hole. Potential exists here for concealed epithermal and porphyry copper-gold mineralisation beneath the sediments and agglomerates from the upper Cretaceous stratigraphy. Audio-frequency Magneto-telluric (CS-NSAMT) geophysical surveying is in progress at the property. The survey is expected to be completed by end of April with geophysical models expected by the end of May.

The exploration work programs described herein were supervised by Y. Khrischev, the Company’s Exploration Manager in Serbia and Bulgaria who has also prepared the above technical information in this press release in accordance with Canadian regulatory requirements as set out in National Instrument 43-101. The above technical disclosure in this press release has been reviewed, verified, and approved by R. Jemielita, PhD, MIMMM, a Qualified Person as defined by NI 43-101 and consultant to the Company.

Mundoro is a Canadian listed royalty generator company with a portfolio of projects focused on base and precious metals that generate royalties and near-term revenue from mineral properties. To drive value for shareholders, Mundoro has generated a portfolio of mineral projects primarily focused on copper and gold in Serbia and Bulgaria. Value generated from our mineral properties is through near term revenues from various forms of payments from partners and long term through the generated royalties. 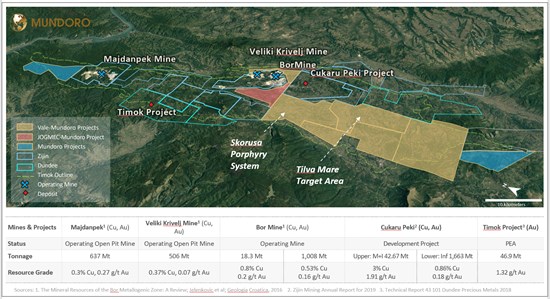 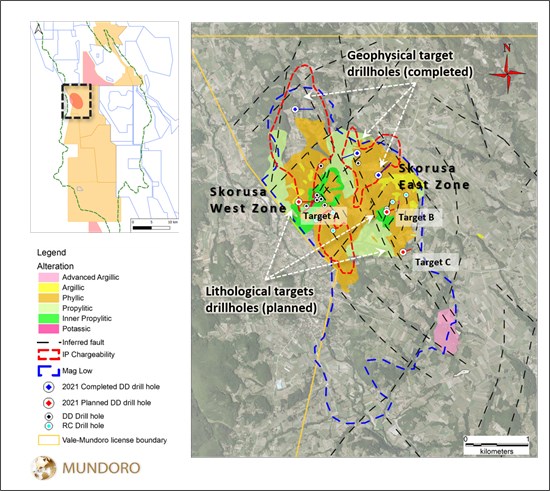 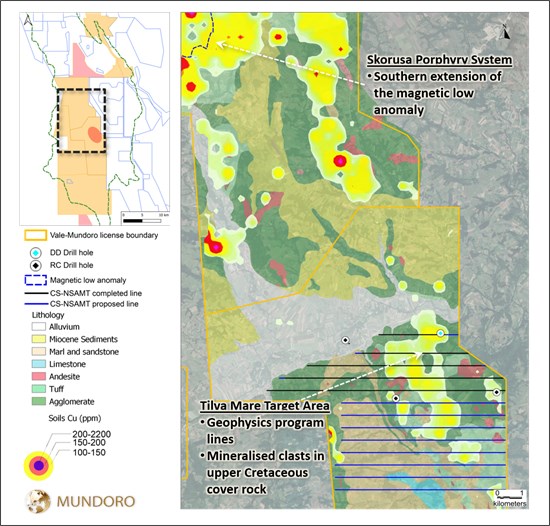 Figure 3- Map showing location of Tilva Mare prospects in Oblez license with geology and copper geochemistry. Skorusa Porphyry outline to the north is shown for reference.

To view the source version of this press release, please visit https://www.newsfilecorp.com/release/79557