Newmont’s attributable gold production in the second quarter increased roughly 3.4% year over year to around1.5 million ounces in the quarter.

The company’s costs applicable to sales (CAS) for gold were $932 per ounce, up 23.4% year over year. The increase was mainly driven by higher direct operating costs resulting from higher labor costs and increased commodity inputs, including higher fuel and energy costs.

All-in sustaining costs (AISC) for gold were up 15.8% year over year to $1,199 per ounce, mainly due to higher CAS per gold equivalent ounce.

For 2022, Newmont expects attributable gold production of 6 million ounces. The company also expects gold CAS to be $900 per ounce and AISC to be $1,150 per ounce.

Newmont’s shares have declined 14.9% in the past year compared with a 29.5% fall of the 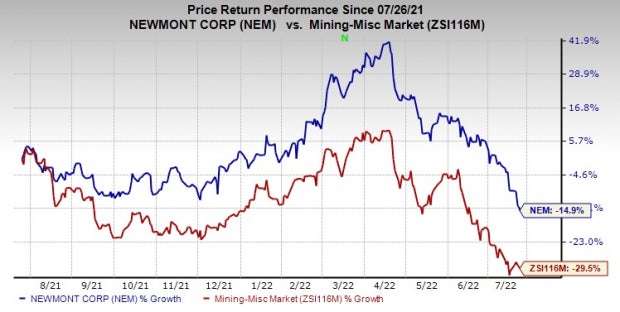 Some better-ranked stocks in the basic materials space are

Albemarle has a projected earnings growth rate of 241.8% for the current year. The Zacks Consensus Estimate for ALB’s current-year earnings has been revised 21.5% upward in the past 60 days.

Albemarle’s earnings beat the Zacks Consensus Estimate in each of the last four quarters. It has a trailing four-quarter earnings surprise of roughly 22.5%, on average. ALB has gained around 13.7% in a year and currently carries a Zacks Rank #2 (Buy). You can see

Cabot’s earnings beat the Zacks Consensus Estimate in each of the trailing four quarters, the average being 16.2%. CBT has gained around 28.6% over a year.

Sociedad has a projected earnings growth rate of 422.4% for the current year. The Zacks Consensus Estimate for SQM’s current-year earnings has been revised 75.3% upward in the past 60 days.

Sociedad’s earnings beat the Zacks Consensus Estimate in two of the trailing four quarters, the average being 28.2%. SQM has gained 89.6% in a year. The company sports a Zacks Rank #1.

Most of the stocks in this report are flying under Wall Street radar, which provides a great opportunity to get in on the ground floor.

Want the latest recommendations from Zacks Investment Research? Today, you can download 7 Best Stocks for the Next 30 Days.