In June 2021, Conquest announced the commencement of a 10,000 m diamond drill program on its 100% owned Belfast-TeckMag Project (Figure 1). To date, sixteen drill holes totaling an aggregate of 5,699 m have been completed that tested a variety of regional targets generated from Conquest’s completion and interpretation of Geotech VTEM and regional magnetic surveys (2018, 2021), follow-up ground geophysical surveys, as well as targets generated from reviewing historical data. Assay results have been received for drill holes BC21-02 through to BC21-13, and are reported below. No significant results were returned for drill holes BC21-06, -09, -12, and -13.

Down hole geophysical EM (BHEM) surveys have also been completed in drill holes BC21-02, BC21-05, BC21-11, and BC21-15. The downhole surveys in the BC21-05 to BC21-011 mineralized corridor have detected a widespread area of conductive, sulphide-bearing, source rocks within the Copper bearing horizon extending over an area of >200x200m extending from holes BC21-05 and BC21-11, and over depth intervals of 100 m and 200 m respectively. A detailed target interpretation of the geologic and geophysical data (VTEM, BHEM and vertical gradient magnetics) suggests a follow up drill program targeting the extents of the local West to East trending series of discrete magnetic signatures, which coincide with the location of the newly discovered Cu-rich VMS zone. Including the weaker responses, two local areas of anomalous VTEM response can be outlined and isolated from the Eaglerock and Emerald Lake areas (Figure 2, black dashed). Drill holes BC21-05 and BC21-11 intersected the anomalous copper horizon within the west to east oriented magnetic responses. The subsequent BHEM surveys reveal near field conductors that are also largely within the magnetic expressions and/or near magnetic edges. The follow up drill campaign for the BC21-05 and BC21-11 region will be to step out on the BHEM and VTEM conductors within the extents of the target magnetic features and at the edges, over a strike length of >1 km across the magnetic signatures/edges. A program of 8 to 10 drill holes totaling approximately 3000 m is planned (black crosses, Figure 2) with an approximate interhole distance of 225 m apart on the local magnetic high expressions, at edges or on descending mag expressions, as well as individual BHEM conductors, including two drill holes targeting offhole conductors, will also be drilled within 100 m of existing holes.

Joerg Kleinboeck, P.Geo., Conquest’s Vice President of Exploration, stated that, “The widespread copper mineralization intersected in drill holes BC21-05 and BC21-11 is encouraging as it represents a new discovery that warrants further investigation. Drill crews will be mobilized back into this area in the next two weeks to follow up on the results from the recently completed downhole surveys.”

Thomas Obradovich, Conquest’s President and CEO stated, “After months of regional target testing it is gratifying to identify an area where we can increase our drill density on a well mineralized system with the goal of locating economic phases of a VMS system.” 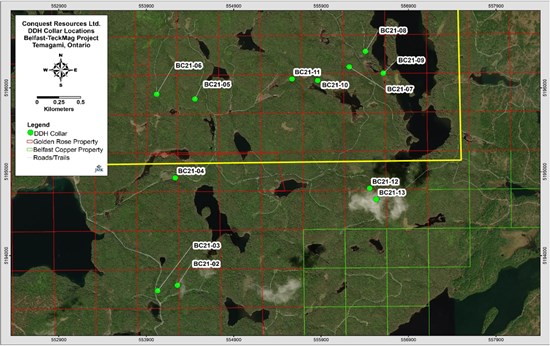 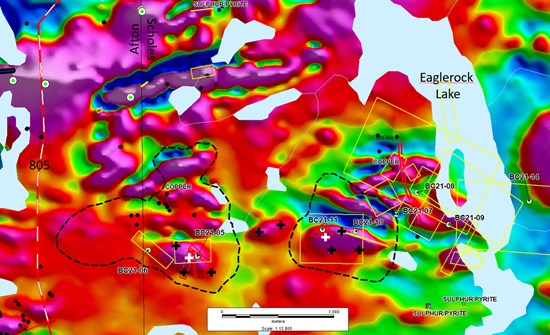 Diamond drill core was logged, and where marked for sampling, cut in half, with one half placed in a labelled sample bag, and the remaining half placed back into the core tray and stored in a secured compound. A blank and a standard were inserted in the assay sampling sequence at every 10th place respectively. All samples were shipped to Activation Laboratories in Timmins, Ontario. Once the samples are received and dried at the laboratory, the samples are then crushed to 80% passing 10 mesh (2 mm) and then split into 250 g sub-sample size using a Jones Riffle Splitter. These sub-samples are then pulverized (using rings and pucks to 90% passing 200 mesh (0.075 mm) and homogenized prior to analysis. Gold analysis is performed using a 30 g charge by fire assay using lead collection with a silver inquart (1A2 package). The lower detection limit is 5 ppb, and the upper detection limit is 5000 ppb for this analysis. A gravimetric finish (1A3 package) is completed for any samples that return greater than 5000 ppb that includes crushing of the entire sample to -150 mesh and subsequently sieved through a 150 mesh screen. The entire +150 mesh portion is assayed, along with two duplicate cuts of the -150 mesh portion. Results are reported as a calculated weighted average of gold in the entire sample. Results for the 38 element ICP analysis (1E3 package) includes digesting 0.5 g of the sample with aqua regia for 2 hours at 95 °C. The sample is cooled and then diluted with deionized water. The samples are then analyzed using an Agilent 700 series ICP for the 38 element suite. QC for the digestion is 15% for each batch, 2 method reagent blanks, 6 in-house controls, 8 sample duplicates and 5 certified reference materials. An additional 20% QC is performed as part of the instrumental analysis to ensure quality in the areas of instrumental drift. If over limits for base metals are encountered, a sodium peroxide fusion, acid dissolution followed by ICP‐OES is completed.

The technical content of this News Release has been reviewed and approved by Joerg Kleinboeck, P.Geo., a qualified person as defined in NI 43-101.

Conquest Resources Limited, incorporated in 1945, is a mineral exploration company that is exploring for base metals and gold on mineral properties in Ontario.

Conquest holds a 100% interest in the Belfast – Teck Mag Project, located in the Temagami Mining Camp at Emerald Lake, approximately 65 kilometers northeast of Sudbury, Ontario, which hosts the former Golden Rose Gold Mine and is underlain by highly prospective Abitibi greenstone geology along a strike length of seventeen (17) kilometers.

In October 2020, Conquest completed the acquisition of Canadian Continental Exploration Corp. which holds an extensive package of mining claims which surround Conquest’s Golden Rose Mine, and subsequently doubled its land holdings in the Temagami Mining Camp through the staking of 588 mining cells, encompassing approximately 93 sq km., centered on Belfast Township, on the edge of the Temagami Magnetic Anomaly.

Conquest now controls over 350 sq km of underexplored territory, including the past producing Golden Rose Mine at Emerald Lake, situated in the Temagami Mining Camp.

Conquest also holds a 100% interest in the Alexander Gold Property located immediately east of the Red Lake and Campbell mines in the heart of the Red Lake Gold Camp on the important “Mine Trend” regional structure. Conquest’s property is almost entirely surrounded by Evolution Mining land holdings.

In addition, Conquest owns a 100% interest in the Smith Lake Gold Property of six patented claims and 181 staked mining claims to the north, west and south of the former Renabie Gold Mine in Rennie Township in northern Ontario, operated by Corona and Barrick that had reported gold production of over 1,000,000 ounces between 1947 and 1991 (Northern Miner March 4, 1991).

Forward-looking statements. This news release may include certain “forward-looking statements”. All statements other than statements of historical fact, included in this release, including, without limitation, statements regarding the completion of the Acquisition and the Consolidation, the release of escrowed funds, future cash on hand, potential mineralization, resources and reserves, exploration results, and future plans and objectives of Conquest, are forward-looking statements that involve various risks and uncertainties. There can be no assurance that such statements will prove to be accurate and actual results and future events could differ materially from those anticipated in such statements. Important factors that could cause actual results to differ materially from Conquest’s expectations are exploration risks detailed herein and from time to time in the filings made by Conquest with securities regulators. Neither the TSXV nor its Regulation Services Provider (as defined in the policies of TSXV) accepts responsibility for the adequacy or accuracy of this release.

To view the source version of this press release, please visit https://www.newsfilecorp.com/release/100314