Including one-time items, the company reported net income of 56 cents per share in the fiscal fourth quarter compared with the prior-year quarter’s 72 cents.

Net sales for the reported quarter slid 8.7% year over year to $1,409 million. However, the reported figure beat the Zacks Consensus Estimate of $1,384 million.

Cost of goods sold in the quarter was down 11.2% year over year to $1,146 million. Gross profit was up 4% year over year to $263 million during this period. Core EBITDA was $176 million in the fiscal fourth quarter compared with the year-ago quarter’s $159 million.

The Europe segment’s revenues came in at $179.8 million, marking a year-over-year decline of 12.3%. Adjusted EBITDA was $23 million in the fiscal fourth quarter, flat year over year.

On Oct 14, the company’s board announced a quarterly dividend of 12 cents per share. This dividend will be paid on Nov 13, to shareholders of record on Oct 29, 2020.

Net sales in fiscal 2020 dropped 6% year over year to $5.48 billion. However, the reported figure beat the Zacks Consensus Estimate of $5.45 billion.

Commercial Metals believes finished steel volumes for North America and Europe operations will follow seasonal trends in the first-quarter fiscal 2021, while North America operations will be adversely impacted by storms in the Texas and Gulf Coast markets. Meanwhile, solid construction backlog will support steel shipments and downstream products in the near term.

The company anticipates the recent rise in scrap costs to impact margins  in its North America business in the fiscal first quarter to. This will however be partly negated by increase in steel price that have come into effect in the ongoing quarter. Long products steel market in Europe is expected to remain challenged due to elevated import levels.

Nevertheless, strong demand, spurred by recovery in the construction sector and rebound in Central European industrial production, will drive growth.

The company expects its ongoing network-optimization efforts will yield additional margin and working capital benefits in the near future. Additionally, Commercial Metals announced the construction of a third micro mill in Arizona, which will be the world’s first to produce merchant bar quality (MBQ) steel products. The new facility is expected to commence operation in early 2023.

Commercial Metals’ shares have gained 19.6% over the past year, outperforming the 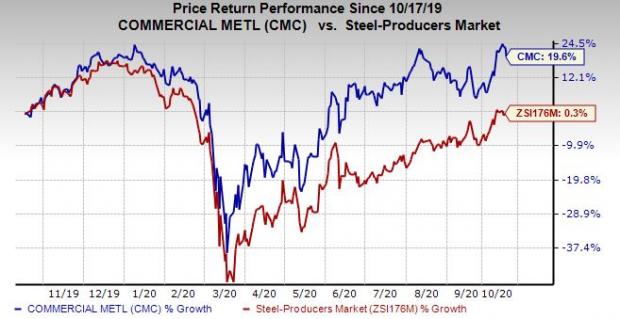 , each carrying a Zacks Rank #2 (Buy) at present. You can see


Brenntag has an expected earnings growth rate of 4.4% for 2020. The company’s shares have rallied 37.3% over the past year.

Equinox has an estimated earnings growth rate of 148.3% for the current year. The stock has surged 130.1% in the past year.

Although marijuana stocks did better as the pandemic took hold than the market as a whole, they’ve been pushed down. This is exactly the right time to get in on selected strong companies at a fraction of their value before COVID struck. Zacks’ Special Report, Marijuana Moneymakers, reveals 10 exciting tickers for urgent consideration.


Want the latest recommendations from Zacks Investment Research? Today, you can download 7 Best Stocks for the Next 30 Days.